My lease was running out and I was vaguely looking at apartment prices in my area when I saw it: my dream place.

My dream place turns out to be a converted loft upstairs from an organic cafe that’s never open and adjacent to an overgrown empty lot. From the outside it’s terrifying, but the inside is all natural light, high ceilings with rafters and tacky faux-wood linoleum. It was my first choice last time I moved house (and was unfortunately off the market before I got it) but this time damnit, it was going to be mine. 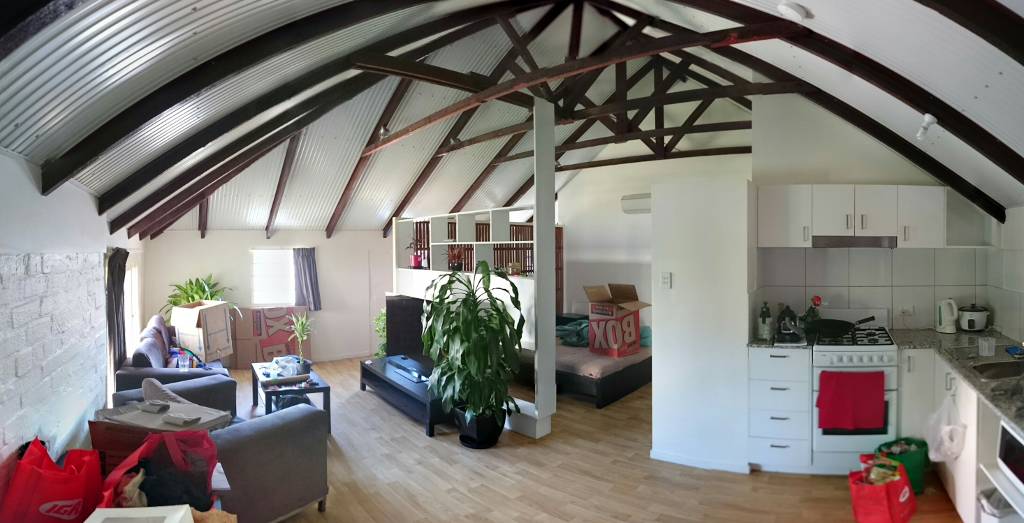 So I inspected it, submitted an application, and moved in over the weekend. Couldn’t be easier!

Then I tried to get the Internet on.

For those who aren’t in the know, in 2012/13 Telstra replaced the ageing copper network from the South Brisbane exchange with fibre to the premises. The caveat being that it’s still wholly owned by Telstra and has nothing whatsoever to do with the NBN.

It’s known by various names, “South Brisbane Fibre” being the preeminent one, but Telstra also calls it “Telstra Velocity” or a “smart community” just to make things confusing.

The idea is nice, but as far as the consumer is concerned it would have been better if the rotting copper was left in the ground. Since getting their “smart” on Telstra jacked up wholesale prices, started demanding exorbitant monthly line rental fees, and throttled the network to copper-comparable speeds anyway.

Since the government prevents other parties rolling out networks that compete with the NBN and there’s none of the checks and balances the ADSL network enjoys, this is an outright Telstra monopoly and they seem to be making the most of it.

Getting connected in South Brisbane

At my previous place in South Brisbane it took $300 and almost two months chasing iiNet to get online.

At my new place I figured I’d ditch iiNet because they were so useless and go straight with Telstra because surely being the operator of the network they’d have a better idea of what they’re doing.

The plan on offer was somewhere in the vicinity of $130/month before line rental (another $30 which they don’t tell you until the price goes up at the end). This brought it to over $150/month for the most basic access to the ‘net which is totally unreasonable and I have no idea how they can get away with it.

This month's internet bill just hit $470 not including what it's costing to get my landline connected. When was that NBN happening again?

My next port of call was TPG who either refuse to service the South Brisbane area as a result of Telstra’s ridiculous monopoly, or just didn’t know what they were doing. I don’t blame them either way, getting online here has been one of the most frustrating things I’ve had to do as an adult and if I were a service provider I would avoid dealing with Telstra wherever possible.

Finally I called Internode who knew exactly what was going on and generally didn’t completely suck. The downside is their South Brisbane plans run between $150-200 per month for a paltry 250 GB. At this point I just don’t care because I’ve already burnt through more than double that figure this month in mobile broadband and need to get online, but it’s an extraordinary figure and I’m having trouble justifying it.

It’s easy to blame Telstra for being a lumbering, incompetent monopolist but how did this happen?

In both cases my address hasn’t been in whatever database they use to look things up, and both times it’s caused holdups from “we can’t find you in the system” and “you can’t get Internet” to “we accidentally disconnected your landlord instead, lol soz”.

Surely having just finished updating the network in 2013 they would have all this information? Apparently they don’t keep this around, as even my current apartment which was only disconnected the previous month is completely missing from the system.

Meanwhile I still don't have Internet at my new place and they seem completely unwilling to help.

Further, both times I’ve had to have technicians come out to poke around to work out what’s going on. The first time took a full four hours to suss out the building connectivity, including everything from calling the helpdesk to shining lasers down the fibre to work out which cable needed to be plugged in at the basement. These visits cost $300 a pop and it’s a total rort.

That it’s the 21st century and you can’t light up an apartment within five minutes by filling in an online form is boggling, and I just don’t understand how so much human intervention is required to get the data flowing over a damn fibre network.

The clincher I think is the all-‘round lack of knowledge not just within Telstra where the teams are all siloed and don’t know what they don’t know, but also within the resellers of which only Internode seem to have trained their staff. Essentially, nobody knows what’s going on.

Yeah, the NBN is pretty much dead. There’s no fibre coming, no hundred megabit, let alone gigabit networking. The policy’s there in name, but the political will certainly doesn’t seem to be.

Crazy. While both NBN & ADSL2+ are available, NBN will be speed limited to 12mbps, which less than half the US definition of broadband

New developments (like hopefully my new new place) will get NBN fibre, but existing premises aren’t so lucky. As I understand it the current plan is to buy back Telstra’s corroded copper network and roll out HFC and VDSL tech as far as it will go. South Brisbane on the other hand, is likely stuck with Telstra for the rest of time since it’s unlikely the government will separate them or buy up the fibre network any time soon.

Meanwhile the alternatives aren’t many. I’ve currently got a $140/month, 50 GB LTE service from Vodafone which is a reasonably attractive offer by South Brisbane standards but nowhere near girthy enough for my needs. The best Telstra and Optus can offer are 10 GB and 12 GB respectively which is laughable. Beyond that there’s no alternative but to capitulate and give Telstra your firstborn.

I’m still waiting to be connected. I’ve spent nearly half a grand on Internet (and that’s before the laying anything down for a wired service) and I’m seemingly no closer to having my fibre box light up than I was when I started.

I’m kinda starting to think think I should just quit tech and become a barista.