It’s been a while since I’ve made a new building in Inkscape, but this weekendI had a crack at a building I’ve been admiring for a while,Manor Apartmentsin Brisbane CBD.

I’ve been making these for a while. They’re stylised vector-basedisometricbuilding tiles that can be used in some hypothetical game I might make one day.The colours are specifically chosen from a palette that lets meprogrammatically recolour them on the fly.

This is today's art project. pic.twitter.com/asnBdYrT2c

I find getting the base sorted at the start is really useful. In most cases,this just involves drawing a square or rectangle base and I have a template whichyou can see in the image that lays out a standard block size of 256×128pixels. This building is easy in that it’s essentially a rectangle so I can getaway with minimal changes.

Next step is drawing windows, or other repetitive features. These can be clonedso that they don’t need to be re-drawn, and any subsequent changes only needto be made to the original in order to flow through to the entire image. Usuallythere’s two copies of each feature with different shadows; one facing left andanother facing right.

This building is a little more tricky because it has the sweeping arches on theground floor, as well as various arched windows which are more difficult to drawsince they’re not basic square shapes.

Got a bit of a tower going. pic.twitter.com/8mSyYZIS17

Once the ground floor is done, it’s a step-by-step process to add floors untilwe reach the roof. For the most part these can be duplicated from lower floorsor assets can be reused in different arrangements.

This building is fun because it has so much variety on the different levels. Istylised or glossed over over a lot of the ornamental detail in the originalbuilding because it doesn’t fit with my existing style, but I like how itadds a sort of plastic simplicity to the end result.

Not finished, but I think that's it for today. The Manor Apartments. #inkscape #isometric #gameart pic.twitter.com/EyhjSDzOxd

My plan with this building was to make it modular, so that I could repeatvariations of the first tile a few times to create the rest of the building.This image shows two very similar tower pieces placed next to each other tomake a larger building. I’ve colourised it, and added a couple of other olderbuildings to check the styles work together.

Had more of a play with modular blocks. Fit 'em together to make larger buildings. #inkscape #isometric #gameart pic.twitter.com/lPfbV2g7Rr

Finally, I’ve added and subtracted some floors, added a roof and placed a fewdifferent sized blocks around to make a completely new building. No longer ManorApartments, but a series of blocks that can be configured numerous differentways.

The end result are four separate tower pieces that can be combined or usedindividually to create various large and small buildings. I think it workedreally well, and it’s something I want to explore in future buildings. 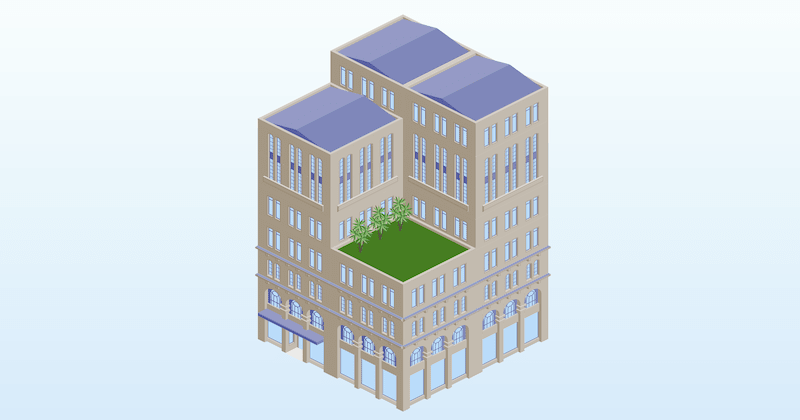